Raccoons (Procyon lotor) are medium-sized omnivores in the procyonid family (Procyonidae).  Although usually nocturnal, they can also be seen during the day.  A black eye mask and bushy ringed tail are key characteristics that quickly distinguish raccoons from other mammals in the region.  Raccoons also possess sharp claws, stocky build, and a broad head with pointed ears and a pointed snout. 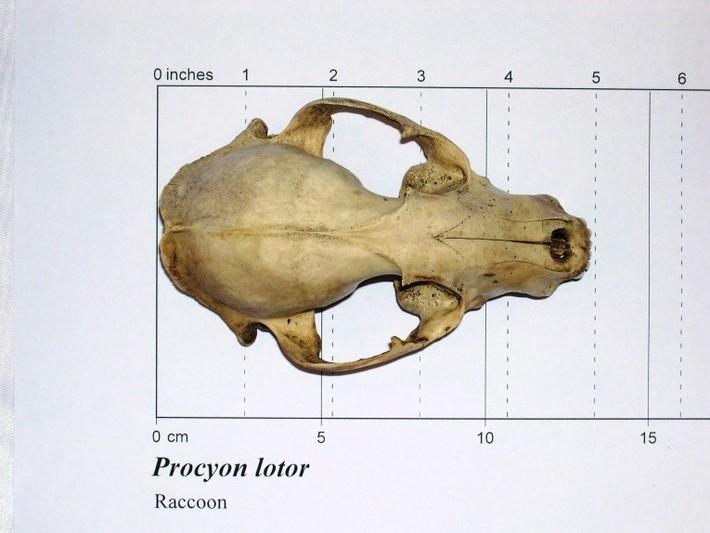 Raccoons were relatively uncommon in Minnesota until the mid to late 19th century, when populations began expanding from the southeastern portion of the state (Timm, 1975; Hazard, 1982). The raccoon has successfully expanded its range in a northerly direction as well as increased in abundance within the Great Lakes region (De Vos, 1964; Jannett et al., 2007).

The current distribution range of the raccoon extends throughout the United States (excluding northern portions of the Rocky Mountains and Great Basin regions) and from British Columbia to Nova Scotia (Chapman and Feldhamer, 1982; Kurta, 1995). Northern range limits have been observed in central regions of Canadian provinces that includes Ontario, Manitoba and Saskatchewan (Chapman and Feldhamer, 1982; Kurta, 1995). Raccoons are found in a variety of habitats, including forests, prairies, swamps, stream corridors, suburbia, and urban areas. In northern climates, raccoons may enter a period of dormancy in a den during winter, though hibernation does not take place. Other times of the year the raccoon can commonly be found in habitats associated with water.

Populations are secure throughout the Great Lakes region.

Worldwide, Procyon lotor ranges widely throughout North and Central America. The Procyonidae family is restricted to the New World, with species ranging throughout North, Central, and South America.

Trapping for raccoons, badgers, foxes, and opossums are jointly administered in Minnesota, typically allowed during a period from fall through winter.  In 2017-8, open season will be from October 14th through March 15th.  Hunting and trapping are regulated by the Minnesota Department of Natural Resources, regulations here

Regional harvest was highest from the 1970s through the late 1980s.  Additional peaks in harvest occurred in the late 1990s, and early 2010s.  These trends likely represent a mix of raccoon population dynamics, market demand, and trapping conditions.

Raccoons mate in early spring, with most litters born in May after a 63 day gestation period.  Three to six cubs are born, in hollow trees where available. The cubs stay with their mother until they are almost a year old.  In Minnesota, raccoons den from the end of October to the end of February, but do not go into torpor.  Raccoons eat a wide variety of food, including insects, crayfish, clams, fish, frogs, eggs, birds, small mammals, carrion, fruits, acorns, grains, and other plant material (Kurta, 1995).  Raccoons adapt to humans and are good scavengers from garbage dumps, campsites, garbage cans, and pet food.  Large mammals and raptors will occasionally kill raccoons, but most raccoon deaths are from disease, malnutrition, hunting/trapping, or old age.  Raccoons are known to be carriers for a large number of parasites and diseases.

Suburban and urban habitats provide additional sources of food for the varied raccoon diet.  Raccoons readily adapt to the presence of humans and are good scavengers from garbage dumps, campsites, garbage cans, and pet food.  Although healthy raccoons seek to avoid contact with pets and humans, raccoons are potential disease vectors.