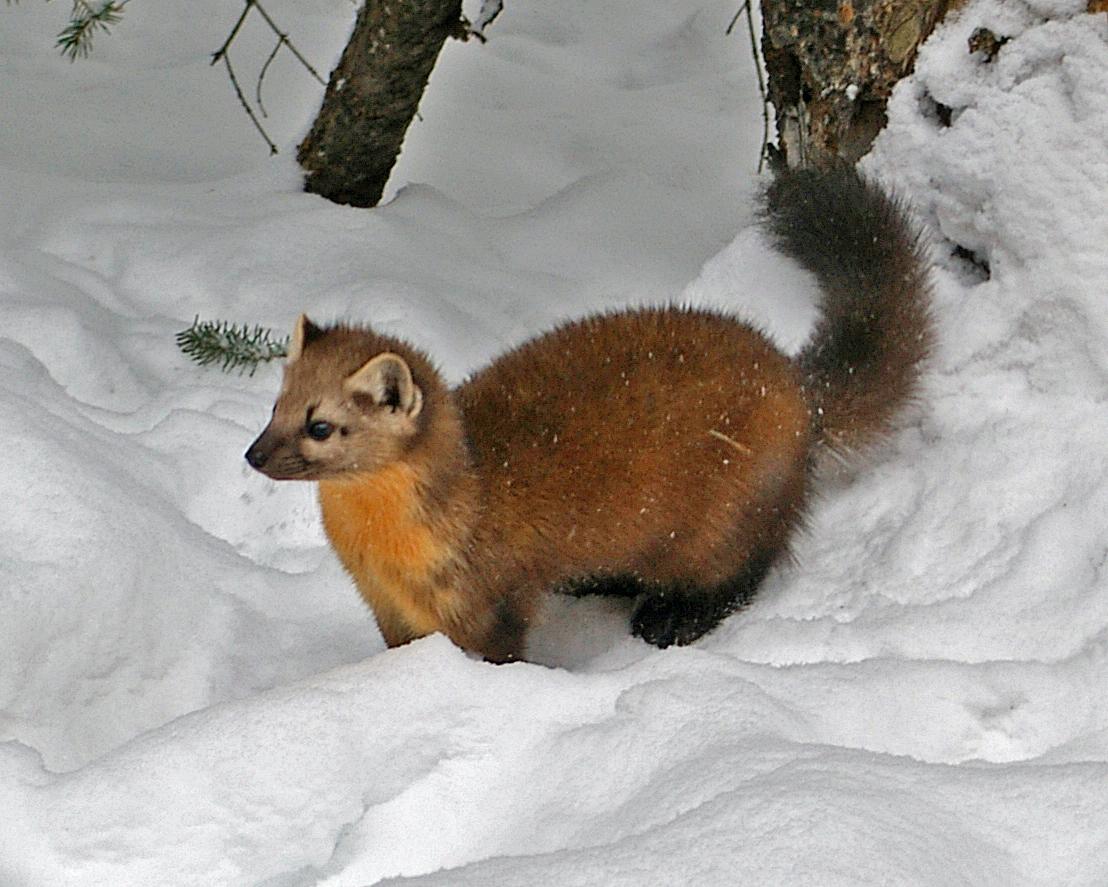 Marten are largely nocturnal, medium-sized carnivores in the weasel family (Mustelidae). The major identification challenge is distinguishing marten from fishers, as they are found in similar habitat in trees and on the ground, and both have thick fur and bushy tails.

Marten are much smaller than fishers and have orange on their throat and chest, which fishers lack. In addition, marten ears and snout appear pointier than fishers. 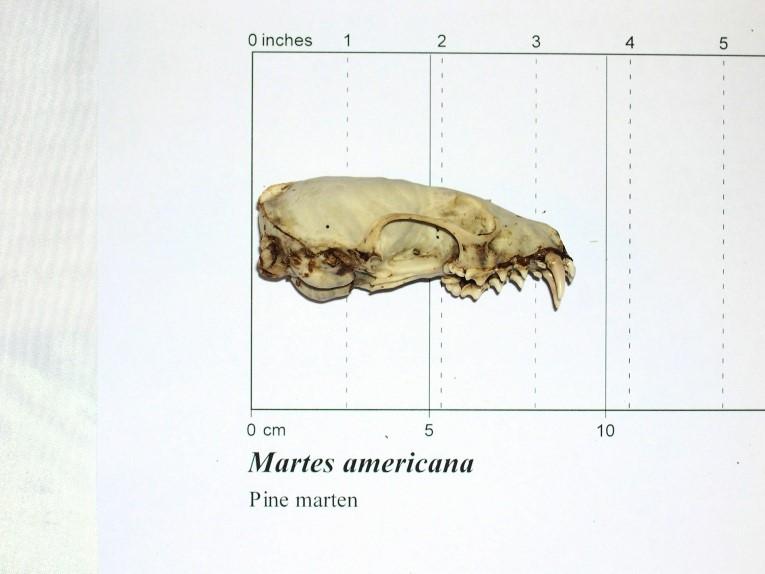 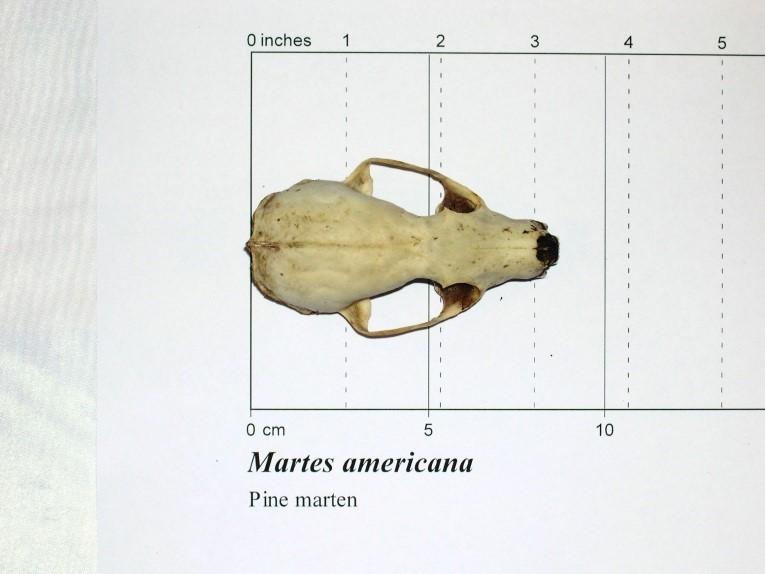 Marten are found in forested regions throughout Alaska and Canada to just south of the conifer tree line in the U.S. (Hazard, 1982; Ruggiero et al., 1994).  Martens were trapped for their fur and were extirpated from the lower Great Lakes region in 1925 (De Vos, 1964). Regionally, marten can be found in northeast Minnesota, Ontario, Michigan, and Wisconsin; this current distribution encompasses 80% of their historical range (Laliberte and Ripple, 2004; Moen et al., 2014).  Marten have state endangered status in Wisconsin.  Populations are secure in Ontario and Minnesota, vulnerable in Michigan, imperiled in Wisconsin, and are presumed extirpated from North Dakota. 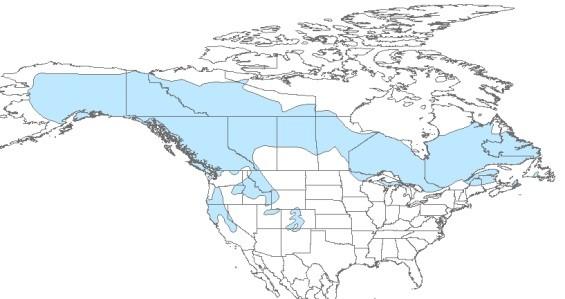 Marten have an IUCN rank of Least Concern, IUCN information.

Trapping for marten and fisher are jointly administered in Minnesota, typically allowed during a short period in late fall.  In 2017, open season will be from November 25th through November 30th.  Hunting and trapping are regulated by the Minnesota Department of Natural Resources, regulations.

From the mid-1980s, marten harvest increased to a peak in the early 2000s, and has since declined. 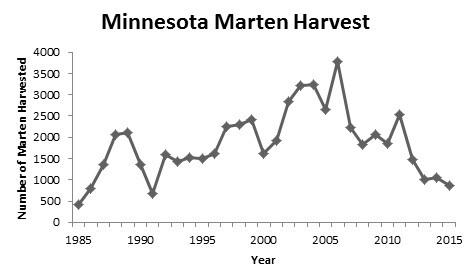 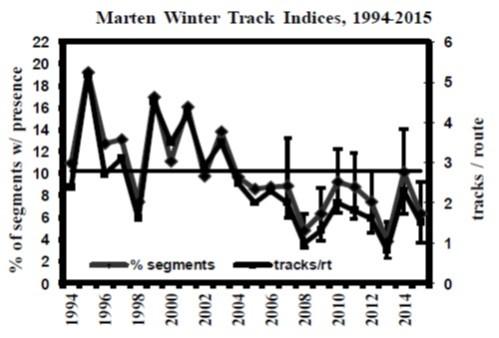 From winter track data (1994-2015) it appears that Minnesota marten populations are stable or in slight decline (Erb 2015).

Marten diet consists primarily of snowshoe hare (Lepus americanus) and squirrels (Sciuridae), supplemented by other small mammals, birds, insects, fruits, and berries (Clark et al., 1987; Drew and Bissonette, 1997; Gosse et al., 2005). The marten is mostly associated with climax conifer forests and other mature hardwoods and requires large amounts of undergrowth and canopy cover (Wright, 1999; Wilbert et al., 2000; Godbout and Ouellet, 2007). Marten mate in mid-summer, but zygotes do not implant in females until mid-winter due to delayed implantation.  Females bear 2-6 young from March to May (average 3-4 kits) after a 60 day gestation, and can mate in their second summer (Hamilton and Whitaker, 1998).  Dens are usually in bushes, hollow logs, trees, and rock crevices.  Kits can open their eyes at 6 weeks, are ready to leave the nest at 2 months, and disperse in the fall.  Marten are prey for raptors and larger mammal carnivores.

Reduced amounts of snow will affect marten distribution (Waltari and Guralnick, 2009). Deep snow gives the marten a competitive advantage over the fisher (M. pennanti) in winter periods (Raine, 1983; Krohn et al., 2004; Waltari and Guralnick, 2009). In montane areas, the marten is expected lose part of its lower elevation range and be more concentrated at higher elevations (Johnston et al., 2012). This loss is expected to reduce genetic diversity, connectivity of populations, and hinder the ability to disperse (Wasserman et al., 2013).

Fur-trapping can be a major source of mortality. Since marten require forested habitat, they are uncommon near farms and are little threat to poultry. Loss of forested habitat from logging combined with fur-trapping harvest can be expected to reduce marten abundance.