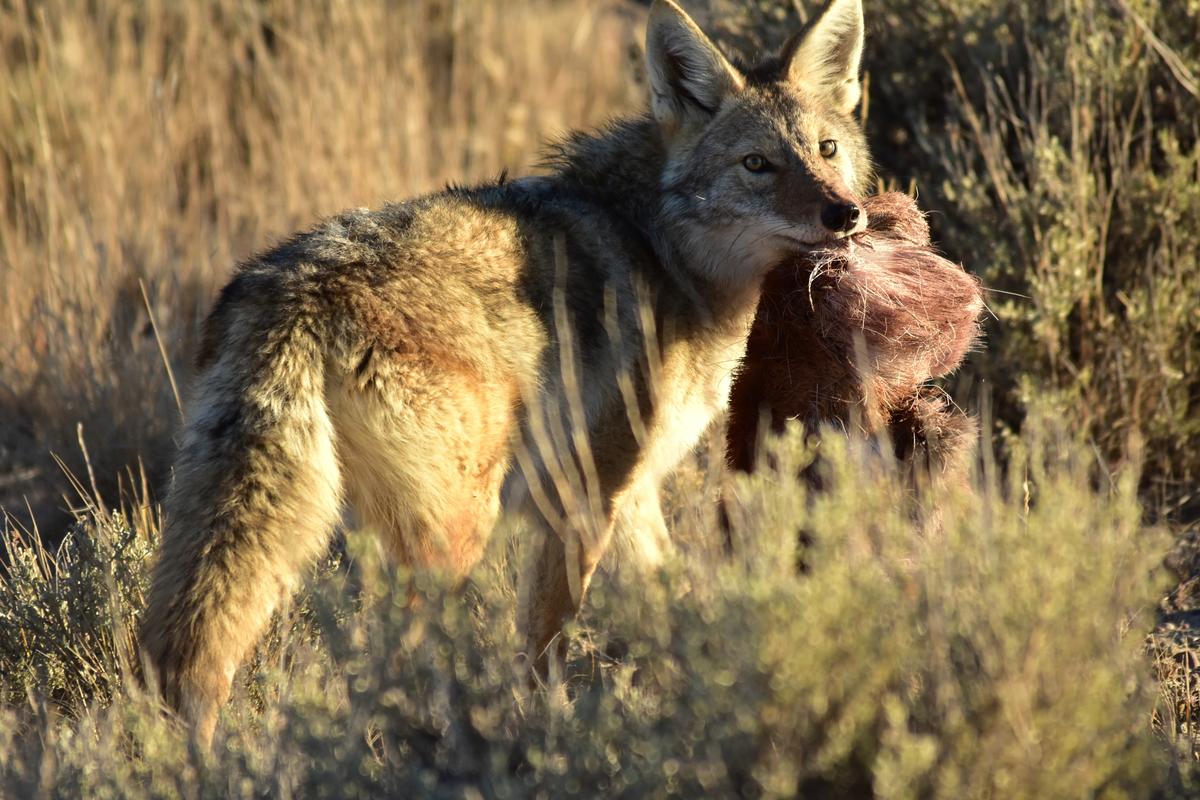 Coyotes (Canis latrans) are medium-sized carnivores in the dog family (Canidae).  Coyotes are about half as big as wolves. We have created some size comparisons on a Coyote vs. Wolf comparison page. Adult wolves also have a broader muzzle than coyotes.  Generally, wolves are predominately gray or black, and lack the yellowish or reddish color patterns found in coyotes.  Coyotes carry their tail low while running, while wolves carry their tail horizontally.

Some domestic dog breeds are superficially similar to coyotes and wolves. However, there are  anatomical and behavioral differences. Most domestic dogs have curved tail tips.  Domestic dogs have a broader chest, resulting in a wider stance in domestic dogs than in coyotes or wolves. A large part of identification is also context. There are many places and times where domestic dogs are  unlikely to be present.

Male coyotes are typically larger than female coyotes. Measurements are from Minnesota (Hazard 1982), Wisconsin (Jackson 1961), and from the Eastern United States (Hamilton and Whitaker 1998). 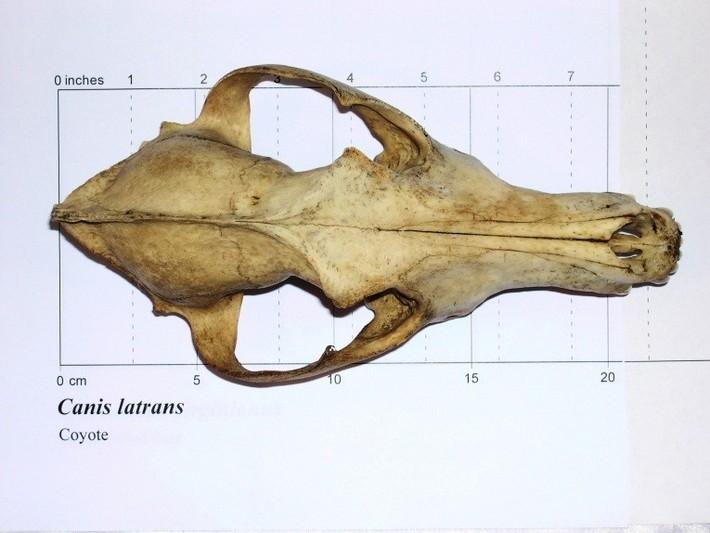 Coyotes are currently found throughout Canada, the United States and Mexico, except for northeast Canada and the tip of the Yucatan peninsula.  Worldwide, Canis latrans is restricted to North America.  Other canid species are found on all continents except Antarctica. Coyotes can be found in a variety of habitats, including cities, and adapt to human presence.  Coyotes are less common in areas where wolves are present. 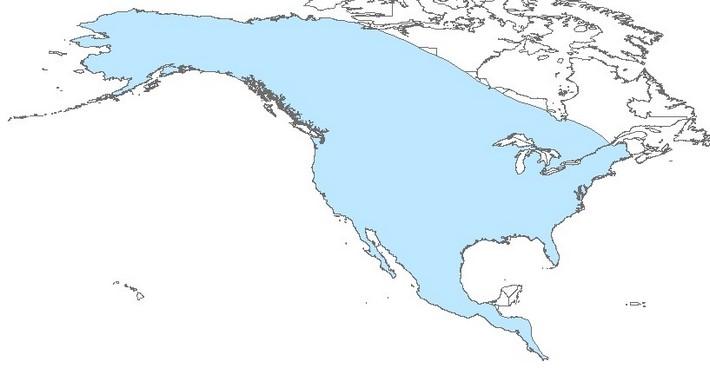 Populations are secure across coyote range, including the Great Lakes region based on Natureserve's classification: NatureServe State/province status. Click here for an explanation of the ranking criteria at NatureServe.   Coyotes have an IUCN rank of Least Concern, IUCN information is available here:  IUCN (International Union for the Conservation of Nature) status.

From winter track data (1994-2015) Minnesota coyote populations appear to be stable based on winter track surveys, as shown in the figure below (From page 8 of Erb et al. 2015). Populations are thought to cycle in response to rodent prey availability (Erb et al, 2015). 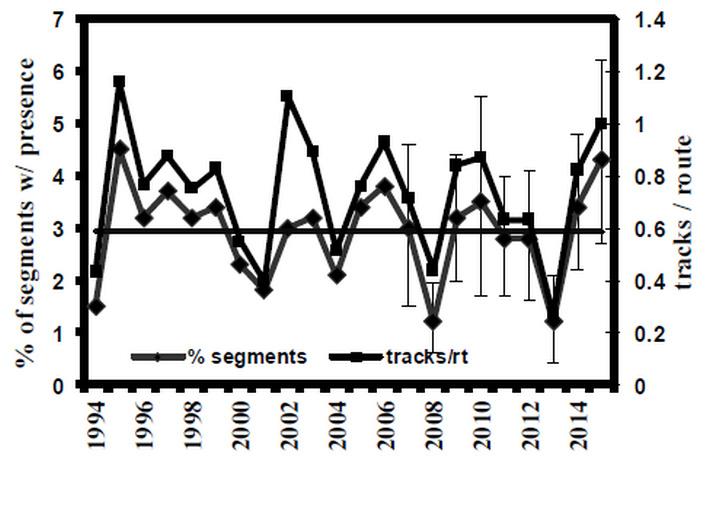 We can use regional furbearer harvest data to help assess population trends, although harvest data can be confounded by changes in effort. Methods we used to collect and plot the regional furbearer harvest are described here. Based on absolute numbers, the highest coyote harvest has been in North Dakota and Wisconsin, with a generally increasing trend. Harvest declined in Minnesota in the late 1990's, and has not recovered to previous levels.

North Dakota and Wisconsin have contributed most to the harvest over the last 20 years, before that Minnesota harvest of coyotes was proportionately higher. The decline in coyote harvest in Minnesota could be related to the expansion of the wolf population in Minnesota. This is further described on the wolf page.

Coyotes prey on small and medium sized mammals, deer, birds, invertebrates, deer, livestock, carrion, and fruit.  Coyotes adapt to a wide variety of habitats, including farmlands, suburbs, urban areas, prairies, deserts, and forests.  Coyotes will use fox or badger dens, dig their own dens, or use ledges, thickets, hollow logs, banks, or slopes as dens.  Dens can have more than one entrance and often have many interconnecting tunnels.

Food supply helps determine the percentage of females that breed in a year (Chapman and Feldhamer, 1982).   Five to seven pups are born in April after 60-63 day gestation.  Eyes open at two weeks, and pups emerge from dens and begin to eat solid food at 3 weeks, when adults provide regurgitated food to the pups.  Families hunt as a unit until the pups disperse in midwinter, with young achieving adult weight at 9 months.  Adults first breed at 1 or 2 years.  Large mammal predators will occasionally kill coyotes, and coyotes are less common in areas with high wolf densities.

Coyotes will occasionally take cattle, sheep and have also been a cause of deer fawn mortality. Controversy over the magnitude of coyote depredation is complicated by differing animal husbandry techniques, and difficulty in assessing economic losses from coyotes (Knowlton et al., 1999).  Coyote predator control programs have been effective in reducing coyote populations, but have not always been followed by increased livestock production (Chapman and Feldhamer, 1982; Berger, 2006). Coyotes are important predators on rodents and other small mammal species considered agricultural pests.