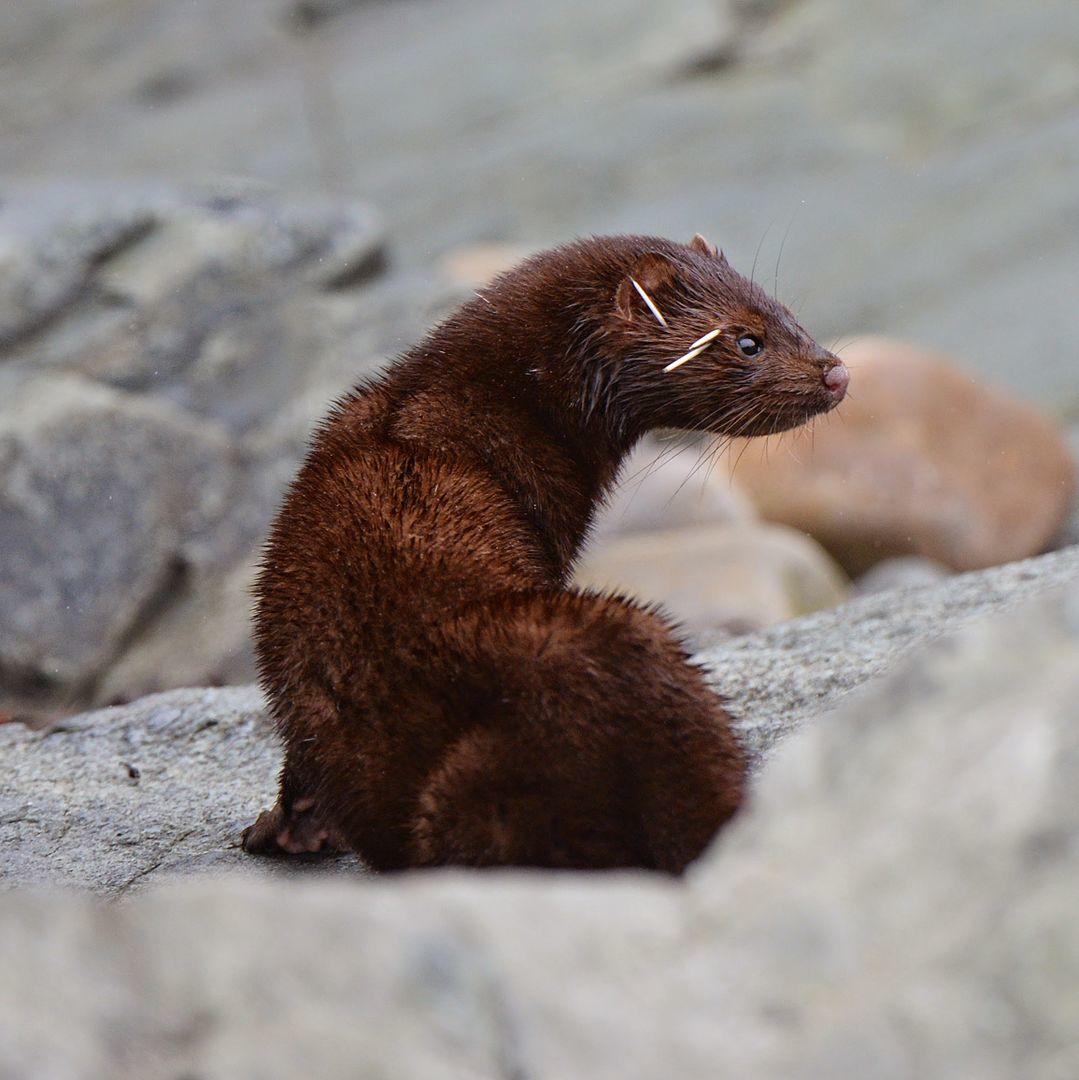 Mink and otters are more closely associated with streams and other aquatic habitat than other weasels. Otters and mink have similar glossy fur and webbed feet; other weasels lack webbed feet and have less shiny fur. Mink are much smaller than otters; mink are less than the size of a house cat, while otters are the size of a medium-sized dog. Mink have less white on their belly than other Mustela weasels and otters, and are brown year-round. Other Mustela weasels have more white on their underside, and many turn white in winter. In addition, mink have bushier tails than other Mustela weasels. Marten and mink are similar sized, but marten have a yellowish throat patch that mink lack, and mink have more rounded ears. Fishers are significantly larger than mink. 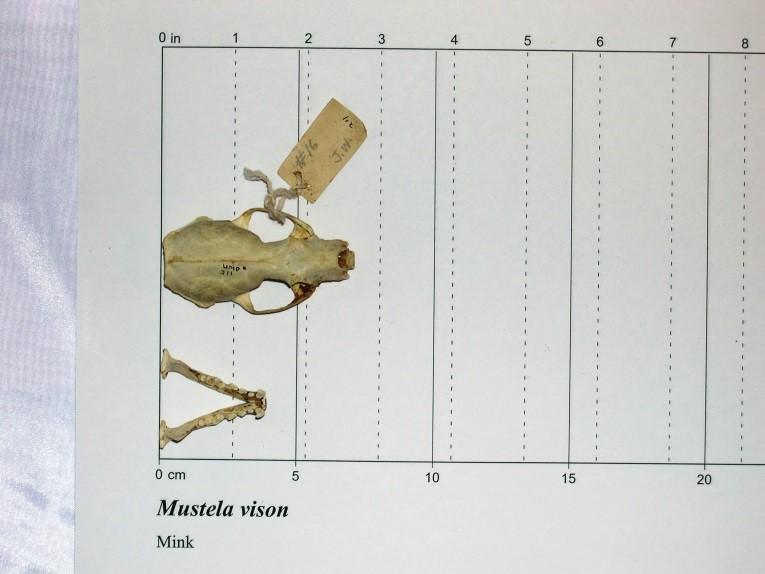 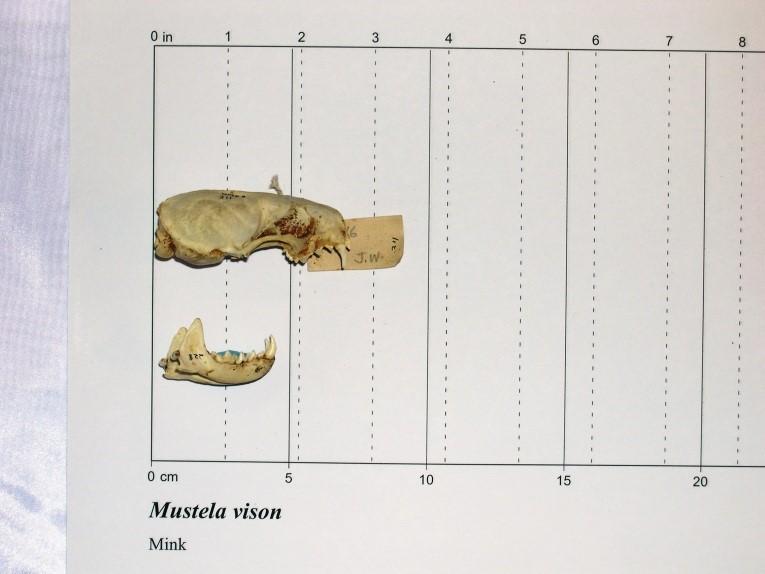 Mink are found near water throughout the U.S. and Canada, except for the southwest U.S. and extreme northern Canada. Regionally, populations are secure in the Great Lakes region. 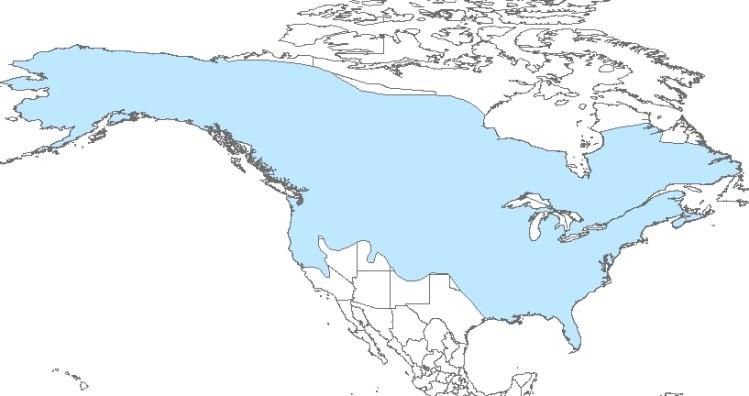 Worldwide, Mustela vison were restricted to North America. Mustela vison were deliberately introduced to parts of Europe for the fur industry and have become established in some locations. Other introduced populations also occur in Japan and parts of South America (IUCN, 2017). European mink, Mustela lutreola, formerly ranged throughout much of Europe, but is currently one of Europe’s most endangered mammals.

Some taxonomists place American mink in their own genus, Neovison vison.

Trapping for mink and muskrat are jointly administered in Minnesota, typically allowed from late fall through winter. In 2017-8, open season will be from October 28th through February 28th. Hunting and trapping are regulated by the Minnesota Department of Natural Resources, regulations here.

To help assess population trends, we can look at regional furbearer harvest data, methods here. Regional harvest has remained steady. From the late 1970s until the late 1980s there was a spike in harvest in Minnesota.

Mink diet consists of aquatic and terrestrial prey, and reflects the local prey base, including small mammals, birds, snakes, eggs, frogs, fish, crayfish, and other invertebrates. Minks are found in wetland habitat along streams, lakes, ditches, and swamps. Mink den in ground holes, rock piles, stream banks, hollow logs, and former beaver/muskrat lodges. Mink mate in late winter, and after a short delayed implantation, 4-6 young are born 40-75 days later in late spring. Cubs open their eyes at three weeks of age and begin to consume solid food. Cubs grow rapidly, by 7 weeks of age attaining about half their adult body weight and length, and disperse in early fall. Adults reach sexual maturity at 1 year old. Mink are occasional prey for raptors and larger mammal carnivores. Mink are known to harbor a large variety of internal parasites.

Mink are a valuable fur resource, and mink ranches are a major commercial source for their fur. Mink are a major predator of muskrats, another leading furbearer. Mink occasionally raid fish hatcheries and henhouses. Wetland draining, stream channelization, dam construction, and other human alteration of riparian habitat have negative impacts on mink populations. Residues from environmental pollutants such as pesticides and mercury can poison mink.